The championships have finally started,it! 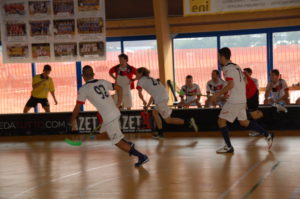 FC Milan already in the top group in Lombardia, after the first day of the Italian Championship of Campo Small.

Sunday 23 October debuted all teams of the club: The "pro" of Molotov team, the "farm team" Rockets, and the very young Bullets.

In the first game Molotov cross slats with an increasingly mature GEAS Sesto,it, which replies blow for blow to the Rossoblu guys goals, and losing ground only in the last minutes. Final results, 6-4 for our after the match.

Simultaneously the Rockets start immediately with a tough match, addressing the expert team UHC Varese, that last year he marched by a whisker the first place in the group to Molotov.
Lot of fighting spirit is not enough for our to bring home the game, and the high technical rate of opponents is felt leading to the defeat with a few goals too than forecast. Nini for the goal of the flag.

End of the day then comes the derbyssimo, with Molotov and Rockets that clash. The finish is granted, but both teams are fighting with such determination. Note on Accursio Graffeo, taking home his first official marking.

Finished senior moment, here come in off the Under14. Our Bullets, following in the footsteps of the great, win the miniderby against Spartak with a goal lead in a thrilling match. After the race the scoreboard reads 5-4 in favor of FC Milan.
In the difficult challenge against the boars of Varese instead it is paid more attacking experience. 6-9 the final result, but still a great improvement over the results of last season.

The RossoBlu boys begin the game in suffering, failing to counter the organized attacks of the opposing team and after only 28 second pass at a disadvantage.

The Molotov try to react but they can not find the right key to defend and share with order and thus suffered the second goal ending the first quarter with a double disadvantage.

At the beginning of the second period Milan could close the gap during the first Power Play of the game, but from a ball the defense of the Serenissima born unlucky own goal leading opponents on 3-0.

At this point Molotov awaken remembering to be a combative team and dies hard. With a good round ball close their opponents in their own half and Rambaldi assists, Brambilla scored from a tight angle reduces the deficit.

I insist RossoBlu , they can defend themselves more effectively, and a great Corti in goal avoids different markings on the break opponents. Rambaldi, instead, He sees the hole and scored the second goal leading the team to only one goal deficit.

In seeking the equalizer F.C. Milan is exposed to counter attacks on opponents and end of the period undergoes the fourth goal.

At the beginning of the third and final period, The Rossoblu are now the goal on a free kick leading to goals Cucchetto, 4-3 and reopened the match.

The period lives down to the wire, both teams created several scoring, but bad luck or skill of the goalkeeper leave the result unchanged. Only a great goal from the opposing captain backhand breaks the balance bringing the Serenissima 5-3, a result that will not change until the end of the game.

F.C. Milan defeat comes at an early period played subdued, not just the belated reaction to achieve a positive result.

The boys and girls RossoBlu, led by coach Coduto, They will surely react to this negative result and demonstrate their value in the next commitments of the season!