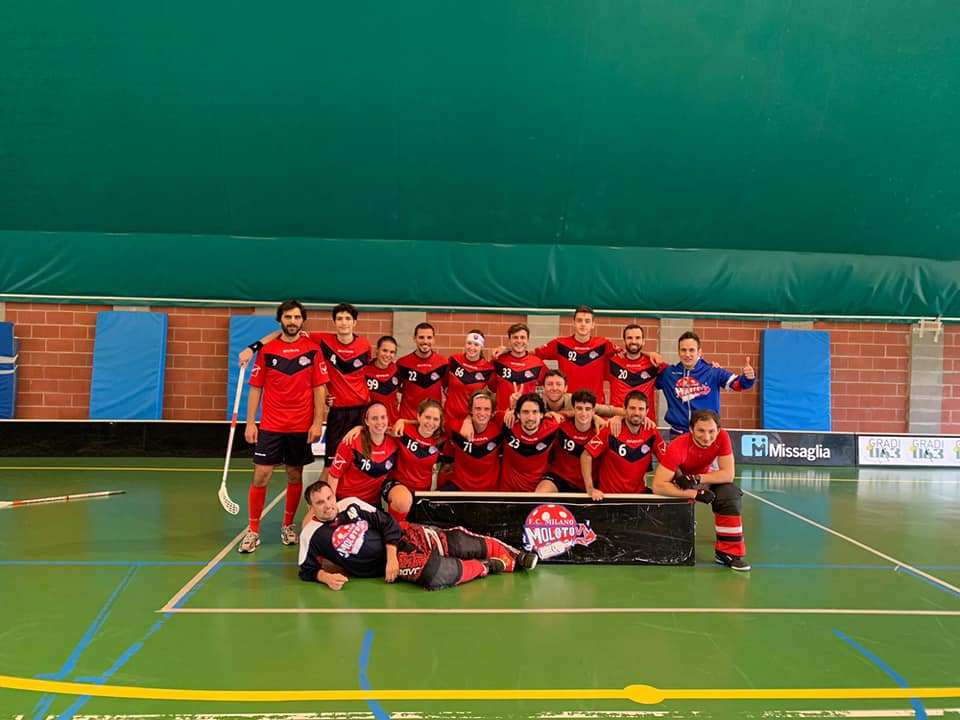 By Francesco Simonetta | Uncategorized | No Comments

On the first day of the Italian Championship on Campo Grande the Floorball Club Milano conquers 5 points on 6 e, despite some inaccuracies, he can be satisfied with his first performances.

Saturday, in the away-from-home match against UHC Varese, the rossoblu have a bad start, conceding three goals to the opponents in the first period. Sul 0-3 but the new Molotov team does not give up, which sees interesting grafts between rookies and elements from the club friend of the SHC Firelions Serenissima.
The goals finally begin to enter, albeit with still some problems in the defensive management.

The new partial becomes 2-5. At this point we could be considered lost, but in goal Pierazzo closes the shutter and goal after goal our grab the equalizer.
Infine, in accordance with the brand new regular season overtime rule (an extra 10 minute golden goal, plus any penalties), the rossoblu scored the winning goal in an excited attack, that gives well 2 of 3 points up for grabs (the other goes to the defeated team in this extra period).

Poetry is the final action that sees the assist of the new Captain “rosa”, Marta Latini, to the legendary outgoing Captain of the last few seasons, Fabrizio Oldrini.

In Sunday's home super-derby the Molotovs try to repeat and improve this first result, in one of the most heartfelt matches of the season.

Spartak Milan opponents start strong, they press a lot, but ours keep, turning on all three lines available to coach Beccarini, with Corti in goal very good at defusing many dangerous shots.
But when a first opponent goal arrives, the tones light up, and the first penalties also begin to fall on both sides, including 10 minutes for the biancoblu flag, Mattia Cucchetto.
In a 4Vs.4 our team draws, and on a powerplay after a few minutes they double, thanks to Marinello and Oldrini.
When at 46 ° the Molotovs score the 3-1, again with Oldrini, the game might seem almost guaranteed.
But Spartak does not give up, attacks by insisting on several occasions, and first shortens to 5 minutes from the end, and then draws 4 minutes from the end.

Other additional ones seem to be looming on the horizon, I love Alex Kuusk #71, just one minute from the end, initials the 4-3 which gives the advantage to FCM.
60heart-pounding seconds, and then the sky is red and blue above Milan, at least until the return match. Honor of their opponents arms, mai domi, in this very hard-fought game, beautiful and fast-paced.

But as always, Go Molotov Go!